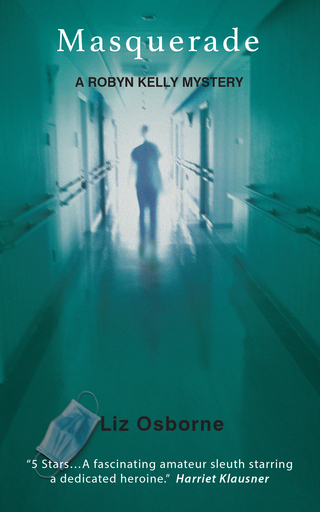 Robyn Kelly deals with conflict all the time in her role as Patient Relations Manager for Madrona Bay Hospital. But when newly-admitted patient, Congressman Jake Hamilton, is found murdered in his room, Robyn's world is turned upside down. Despite orders from police detective Matthew Pierce to stay out of the investigation, Robyn searches for the murderer on her own. Beneath his charismatic image, Hamilton was a ruthless politician with many enemies, and as Robyn risks her own life to delve into the secrets of those around her, she is forced to confront the fact that everyone is living a masquerade.

5 Stars -- A fascinating amateur sleuth starring a dedicated heroine . . . the story line is action-packed as Robyn and Matthew (Det. Pierce) trip over one another while investigating a media frenzy homicide. Robyn rips away the masquerades of everyone she works with in an attempt to uncover the real culprit.
-- Harriet Klausner, online reviewer

"Masquerade is a well-crafted mystery with intrigue and danger aplenty. Liz Osborne has a smooth style and keeps the reader guessing up till the end as to who done it. The settings are more than backdrops and the characters are clearly defined. Masquerade is a good one for mystery lovers."
-- Vi Janaway, Romance Reviews Today

Masquerade is a fascinating look at what really goes on behind closed hospital doors. Liz Osborne has written a compelling mystery, with a likable sleuth, and a "keeps you guessing" plot.
--Denise Swanson, author of Murder of A Real Bad Boy: Scumble River Mystery series

Real-life patient representative Liz Osborne offers a fresh, appealing take on the medical mystery in MASQUERADE. When a congressman is murdered in his hospital bed, patient rep Robyn Kelly can't resist snooping—and the result is a diagnosis for danger. Highly recommended.
--Deborah Donnelly, author of The Wedding Planner Mystery series